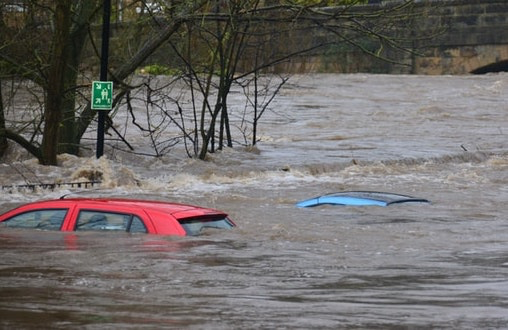 Different Than What You Imagined

“Learn to get in touch with the silence within yourself and know that everything in this life has a purpose.”
~ Elisabeth Kubler-Ross

There is a story about a man who was in an area where the river was about to overflow. When he heard about it on the news he got on his knees and prayed to be delivered from the flood.

In a little while there was a knock on the door. It was his neighbor asking him if he’d like to leave for safety in his car. The man declined, explaining that God was going to deliver him.

The river began to rise and the man’s house started to fill up with water. In a little while another neighbor paddled by in a boat and invited the man to join him in rowing to safety.

Again the man declined explaining that God was going to deliver him.

Now the man was on his knees on the roof of his house praying to God for deliverance. He heard a noise. Looking up he saw a helicopter with a rope ladder dangling. The pilot was shouting for him to grab hold and get pulled up to safety.

Again the man declined explaining that God was going to deliver him.

Fast forward and we find the man is at the Pearly Gates asking Peter if he could talk with the Boss. When he appeared before God he accused Him of failing him.

God’s reply: “First I sent you a car, then a boat, and finally a helicopter!”

Sometimes what we ask for shows up differently than what we had imagined. Thus, it serves to pay attention to, not only the form, but more importantly, the essence of what we are wanting.

Essence is different from form. I don’t know what the man in the above story imagined God delivering him looked like. He was sent three different forms each holding the essence of delivery, which is what he asked for. Apparently he imagined something else and therefore rejected the very thing he was asking for.

There was a time in my life when I was working for a personal growth training company. I loved this training and thought the value it offered was outstanding. Though I was part of the organization, what I really wanted was to facilitate the trainings.

My life was shaped by this vision. I took a 35-day seminar (no days off) focused on professional facilitation. I got a degree as a Master in Spiritual Psychology in order to support myself in being the best possible facilitator that I could be. I traveled all over the place training to do the work.

Then something happened, as often does in life. The door to my dream closed. I no longer was on the path to my goal. I was distraught. I had eaten, drank, and slept my goal for a long while. I had nothing to replace it with.

It wasn’t until I began asking myself, what was the essence of the experience I was looking for, that I realized what I really wanted. It was to facilitate myself and others in manifesting dreams, realizing goals, and learning to live in joy and abundance. In that moment I knew that facilitating for this company was only one of many forms through which I could live my dream. That day was the birth of my own consulting/coaching firm, which eventually led me to where I am today.

I now know that whatever happened was a blessing. I didn’t think so at that moment. As hindsight is 20/20, I am now aware that the closed door was a blessing and part of something greater than I was able to imagine at the time.

When you ask for what you want, and begin to take action toward that outcome, remember to focus on the essence as well as the form. You might find that something even better than you imagined comes into your life!